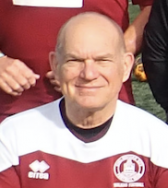 Firstly, a happy New Year to you all.

As you know I have been club chairman for 8 years.

It has been a wonderful adventure helping the club grow from humble beginnings to what it has become today.

I was truly flattered by the overwhelming support I received in the AGM elections, but as you know I made it clear that once Theresa and myself moved to Brightlingsea I would stand down from the chairman’ role.

That time has come.

We have decided as a committee that it would offer most continuity and stability for my successor to come from the existing committee.

I am pleased to share that Chris Jullings will become the new club chairman with immediate effect.

Chris will retain his social secretary role for the foreseeable future.

Club members will have the opportunity to ratify Chris’ appointment when he stands for re-election at the next AGM.

I know that Chris has a great passion for developing the club, so I know it will be in good hands.

I would like to thank you all for the support you have given me over the years, both on and off the pitch.