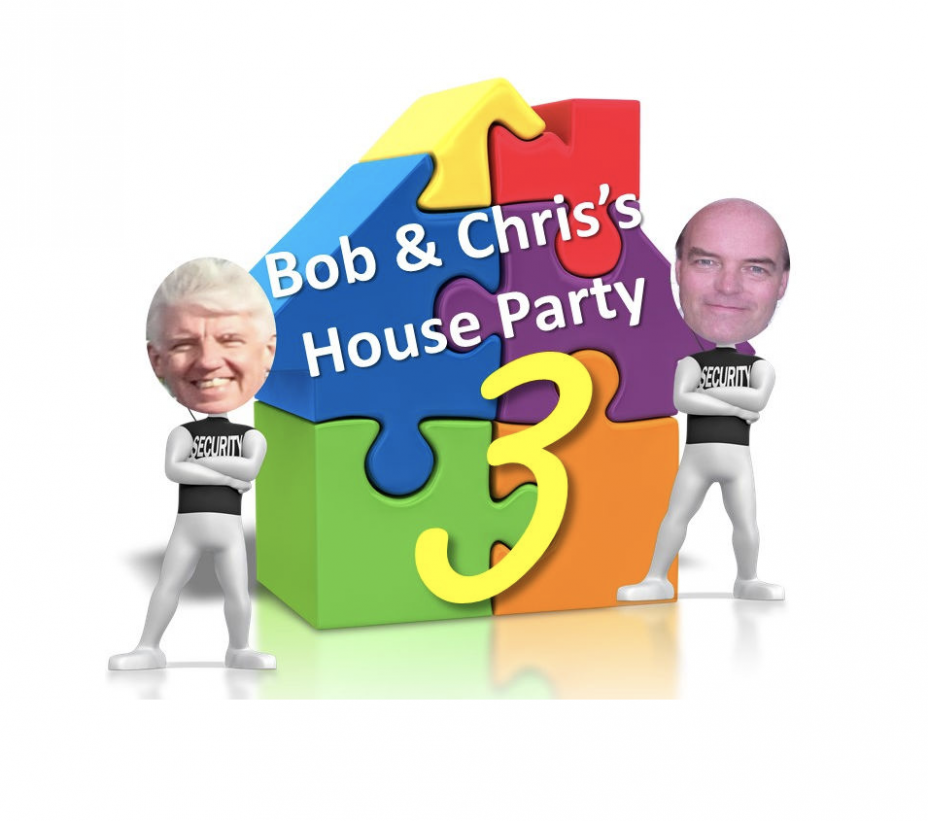 Well after the celestial excitement (I use the word loosely) of House Party 3, we plummet back to earth with another edition of the weekly Newsflash.

I’m pleased to say that all reports suggest that everyone continues to do OK, with a few ups and downs here and there.

This week I bang on about the media (obviously in a thoughtful and considered way!).

We have the ‘warm down’ after House Party 3, with a few screenshots of those responsible!!

We have a great ‘what’s that called?’ from Jim P, plus all the usual nonsense in ‘you gotta laugh.

Enjoy the read, keep the faith, I’m sure we will soon take some baby steps towards doing what we all want to do …. play footie again!

As you well know, I try to focus on topical issues of the day just to stir the emotions a bit (with the occasional meandering into the past).

I’m setting myself a bit of a challenge this week, which is to talk about the media, without becoming a part of the problem myself.

I don’t know about other folks, but I have come to ‘switch off’ the endless sensationalising of what is going on in the world.

This seemed ok, because it was still generally factual, you just made a conscious choice to exercise your reading preference.

There were of course the publications that had ‘bus found on the moon’ and ‘Freddie Star eat my hamster’, but these were largely seen as comics for grown-ups.

We all sought of knew what we were dealing with and we made our choices.

By and large television was respectful and sought to be balanced (not always succeeding), but it succeeded enough to provide a fairly grounded feel to the world.

Then came social media. Everyone suddenly had the opportunity to be a commentator.

The advent of this explosion hasn’t in itself been a bad thing, there are millions of ordinary people far more positively connected than there were (our current COVID 19 challenge has highlighted the good in social media).

But …… it has been seized upon by the sensationalists, the manipulators, the idle, the folks wanting their 15mins of fame.

In my view it has become a vehicle to fuel misinformation; to attack without accountability; to hide in the shadows. This has come to overshadow all of the good that it can do.

Sadly, it started a ’race for notoriety’ and prompted many people using FB, twitter etc to maintain never ending conversations (not even conversations, self-opinionated statements) that have fuelled a

We are all long enough in the tooth to spot it for what it is, because we have reference points to a world when it wasn’t like that. Our kids probably spot it too.

Our grandkids and great grandkids have been born into it. It is easy for them to think that it’s the norm. I try to coach my grandkids to be questioning and discerning of what they are being fed.

Sadly, the developments in social media have spilled back into mainstream journalism (press, TV) forcing them to ‘keep up’.

So, we now get served up with TV presenters various, sensationalising and visibly trying to put everyone on the ropes. It has driven the adversarial at the expense of the collegiate.

It is akin to a return to the Colosseum, except the lions are far more dangerous.

I made a personal decision to step off the media treadmill.

I don’t read newspapers; I don’t listen to TV or radio news; I strictly control my Facebook presence, limiting it to sharing positive stuff about life.

I selectively dip into news reports and information that I satisfy myself are as factual and balanced as is reasonably possible.

Over the last few years I have progressively rejected the media circus.

Perhaps I’m just getting old, maybe I’ve just caught up with the rest of you?

It is undoubtedly one of the challenges of our times!

On a much brighter note, there are still plenty of places of simple truth, facts and a bit of entertainment.

The new Essex Walking Football League website is one of these places! http://essexwalkingfootballleague.org/

Have a look and let Terry B know what you think!

Also, look out for our new CCWFC website, which is coming soon.

I’ll leave you to the rest of the newsflash whilst I just put my soapbox away ? ?

House Party 3 – and the prizes keep on coming!

Well 28 ‘party -goers’ squeezed into ‘the house’ for House Party 3.

There was the highly versatile Bill H doing ‘my name is Michael Caine’, a short, humorous overview of the life and working-class roots of Maurice Micklewhite.

Spence didn’t disappoint with his 1972 revival of a ‘northern comedian’. Brilliantly in character throughout, Spence served up a fusion of Les Dawson, Bernard Manning, Ken Dodd, Charlie Williams et al!

Ollie kept us entertained with the ‘higher / lower’ game, which I have discovered I am worse than useless at!!

Also, a big thank you to Bob for his slick techno management in some challenging circumstances!

It was great to see George & Maureen as well as David T for their first visits to ‘the house’. There is always room for more folks if you would like to join in!

It turned out to be a magnificent first attendance for George & Maureen winning the quiz with 19 points on a tie – breaker. A bottle of Prosecco!

Bad luck Ollie & Janet, so close to a hat-trick of wins.

The bingo almost threw up a clean sweep from the Osborne household.

Lesley won both the line and house on game 3 (a box of chocs and bottle of Prosecco), then Peter cracked the line on game 4 for another box of chocs.

Joanne won the house on game 4 (and bottle of Prosecco).

Michelle then went on to win the first higher / lower game with Dave R grabbing the second (both get chocs).

Bob also ran a new feature ‘your best holiday location’ which threw up some very interesting conversations (particularly the hippo in Skewness).

The real winner on the night, of course, was club unity. It was great to see so many people laughing and feeling connected.

Any suggestions for new content or offer of contributions are very welcome. We have already had one from Mike H.

How to be a superstar series

As you know Bob is releasing video clips in this series in between house parties.

The next one up over the coming days is Smudge and ‘How to be a superstar DJ’. Part 1.

There are others in the pipeline and Bob can still use more volunteers.

We have one player profile in the pipeline, but I could really do with some more volunteers.

It is very easy. I’ll give you some simple guidelines, you produce your story you give it back to me in draft form and I’ll do the final polishing.

There have been some great stories —– are you next?

What do you call that?

A big thank you to Jim P for submitting these brain teasers!

Funny stuff in insurance claims from around the world:

‘Coming home I drove into the wrong house and collided with a tree I haven’t got’.

‘I collided with a stationary lorry coming the other way’

‘I had one eye on a parked car, another on approaching lorries, and another on the woman behind.’

‘I started to slow down, but the traffic was more stationary than I thought.’

‘I was driving along when I saw two kangaroos copulating in the middle of the road, causing me to ejaculate through the sunroof.’

‘I was on the way to the doctor with rear end trouble when my universal joint gave way causing me to have an accident.’

‘Mr. X is in hospital and says I can use his car and take his wife while he is there. What shall I do about it?’

‘The car in front hit the pedestrian but he got up, so I hit him again’

‘The pedestrian had no idea which way to run as I ran over him.’

Q: Could either driver have done anything to avoid the accident? A: Travelled by bus?

‘Going to work at 7:00 this morning I drove out of my driveway straight into a bus. The bus was 5 minutes early.’

Reporter: “Excuse me, may I interview you?”

Reporter: “No no! I mean male or female?”

Reporter: “But isn’t that hostile?”

A man was having premature ejaculation problems, so he went to the doctor.

The doctor said, ‘When you feel like you are getting ready to ejaculate, try startling yourself.’

That same day the man went to the store and bought himself a starter pistol and ran home to his wife.

That night the two were having sex and found themselves in the 69 position. The man felt the urge to ejaculate and fired the starter pistol.

The next day he went back to the doctor who asked how it went.

The man answered, “Not well. When I fired the pistol, my wife pooped on my face, bit three inches off my penis, and my neighbour came out of the closet with his hands in the air.”

Sherlock Holmes and Dr. Watson went on a camping trip.

After a good meal and a bottle of wine, they laid down for the night, and went to sleep. Some hours later, Holmes awoke and nudged his faithful friend.

“Watson, look up at the sky and tell me what you see.” Watson replied, “I see millions and millions of stars.” “What does that tell you?”

Watson pondered for a minute. “Astronomically, it tells me that there are millions of galaxies, and potentially billions of planets.

Theologically, I can see that God is all powerful and that we are small and insignificant. Meteorologically, I suspect that we will have a beautiful day tomorrow.

What does it tell you?”

Holmes was silent for a minute, then spoke. “It tells me that someone has stolen our tent.”

Many of you will have used Sam Robinson to help recover from injuries.

I gave him a call to see how he is doing in this climate. Good lad, he is adapting!

He is doing video consultations, which doesn’t help where hands -on treatment is needed, but it can be very useful for basic assessment and some self-help advice. He is charging £20 for a consultation.

I have 68 tickets ‘sold’, if you want tickets and haven’t booked them, let me know.

As a reminder, the details are:

A bit of a mix this week.

3. What London club did George Best play for after leaving Man U?

4. The ‘Hawthorns’ is home to which English football league club?

5. Which football league club is nick named ‘the Addick’s’

6. Which internal team does Mohamed Salah play for?

8. Which 4 clubs have all spent a 100 or more seasons in the topflight of English football?

9. How many world cup semi-finals have England played in?

10. Who is the Premier Leagues top goal scorer?

Well folks that’s it for now.

There are a few tickets available for the Nov 6th quiz, again let me know your requirements if you haven’t got tickets yet.

Any more volunteers for ‘player profile’? Give me a shout, I’ll guide you through it.

Look out for the invite to House Party 4 for the 25th June!

Stay safe out there, footie is edging closer!! ?